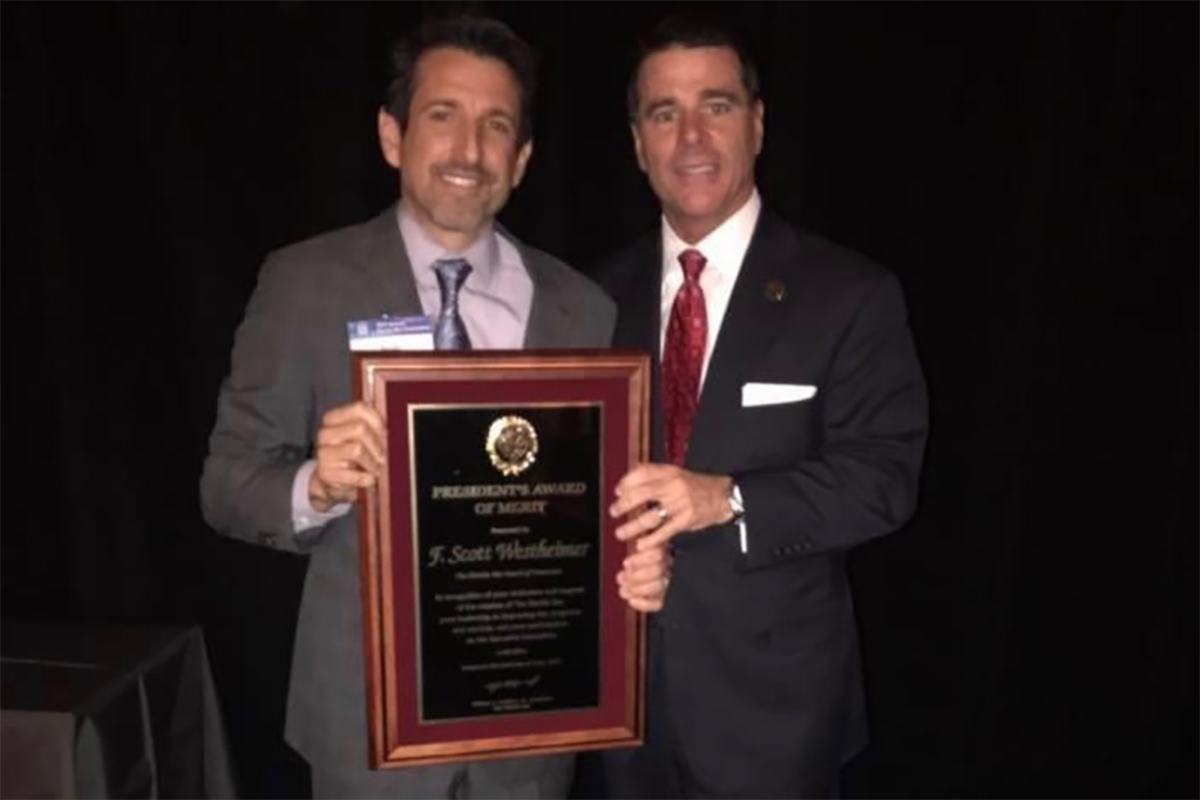 At the General Assembly at the Bar’s Annual Convention on June 23, outgoing Bar President Bill Schifino presented the following awards:

“I’m giving this award to Lorna Brown-Burton to thank her for her tremendous support of Florida’s entire legal profession and all of the Floridians we serve,” Schifino said.

“Lorna has been on the Board of Governors since 2012, and, for the past five years, she has been a tireless worker on every committee, subcommittee, and project she has been appointed to.

“I want to especially commend Lorna for her leadership as chair of the Bar’s Citizens Advisory Committee for the past two years. She has re-energized the committee and has helped our Bar leadership fully utilize and appreciate the contributions of this group.

A second President’s Award of Merit was presented to Paul SanGiovanni.

“Another tireless worker on behalf of the legal profession, Paul was elected to the board in 2011. He hit the ground running that year and hasn’t stopped!” Schifino said. “He has been one of the most active and energetic members of our board, particularly during my year as president.

“This year, Paul chaired the Budget Committee with great diligence at every step of the way. He focused on making sure that Bar programs are financially prudent, cost-efficient, and effective.

“He served on the Program Evaluation Committee and had an integral role in ensuring that the programs and services we provide to members are helpful to them in their practices.

“Paul also was a member of the Communications Committee, and he and others led the effort to redesign our website to make it truly state of the art.

“He served on the Special Committee on Gender Bias, and as board liaison to the Diversity and Inclusion, and Member Benefits committees.

“In everything Paul does, his passion for the Bar and for justice are evident. His energy level is always at top speed, and he is, above all, a really good person.”

The third President’s Award of Merit was presented to Scott Westheimer.

“I’m sure you all have picked up on the pattern by now of these award recipients being tireless workers on behalf of our Bar. Scott is another,” Schifino said.

“He has had four very busy years on the board since he was elected, and he quickly rose to serve on the Executive Committee and as this year’s chair-elect of Communications. Scott has not only worked very hard —also serving on the Program Evaluation, Disciplinary Review, and Strategic Planning committees — he has been a great resource and sounding board for me.

“Several of the projects that Scott has had a hand in this year are the re-launch of Lawyers Advising Lawyers, enhancements to member benefits and the Practice Resource Institute, and the new website redesign.”

Several of the projects that Scott has had a hand in this year are the re-launch of Lawyers Advising Lawyers, enhancements to member benefits and the Practice Resource Institute, and the new website redesign.